Kalguksu is a hearty Korean noodle soup recipe. Made with chewy knife-cut noodles and soaked in a hearty chicken broth, this dish is like a Korean version of chicken noodle soup.

Kalguksu is a very well-rounded dish packed with protein, carbs from the chewy noodles, and a nutritious chicken broth. A serving of Chicken Kalguksu is only 447 calories, with 37 grams of protein, 22 grams of fat, and 37 grams of carbs, following the recipe and portions below.

The key to making this dish help rather than hinder progress toward your fitness goals is portioning high-calorie ingredients mindfully and choosing the right proteins.

💭 What is Chicken Kalguksu?

Kalguksu is the Korean word for knife-cut noodles. Dak kalguksu, or chicken kalguksu, refers to the noodle soup dish that consists of a chicken-based broth. The noodles are simmered in a delicious chicken broth chock full of vegetables. It's essentially the Korean version of a chicken noodle soup.

If you liked this recipe, check out the following:

🍎 Calories and Nutrition – Is Kalguksu Healthy?

While Kalguksu is undeniably delicious,  is kalguksu healthy?

Kalguksu is a very healthy dish given that it predominantly consists of protein from the meat and carbs from the noodles, making it a well-balanced nutritious meal.

To understand the calorie and nutrition content of a typical kalguksu recipe, it’s useful to look at the core ingredients that make up kalguksu. Kalguksu is made of four main components: protein, vegetables, noodles, and broth.

Looking at each component, it’s easy to see that Kalguksu can easily be made to be a high-calorie and high-fat dish if the protein and noodles are not chosen or portioned correctly, making it less than ideal for dieting purposes. However, it’s not hard to make it low-calorie and macro-conscious — this recipe will show you some tweaks that will make kalguksu easy to fit into your everyday diet.

🍏 How to Make It Healthy – The Fitsian Method

In this recipe, I use a more protein-heavy ratio to make this a more macro-friendly and calorie-conscious dish. Here are some key tweaks I made:

For a detailed breakdown of each ingredient, their portioning, and how they make up the nutrition profile of this low-calorie kalguksu recipe, you may refer to the table below:

Prepare the aromatics and chicken – Mince the onion, garlic, mushrooms, and carrots, and cut the cabbage into small pieces. Cut the chicken into bite-sized pieces, removing any excess fat in the process. Season the chicken pieces with salt and pepper.

Sauté the aromatics and chicken – In a saucepan, spray cooking oil and sauté the vegetables and brown both sides of the chicken pieces.

Toast spices – Once the chicken is seared and the aromatics begin to become fragrant, add in the gochugaru and let toast for about 2-3 minutes.

Make the broth – Add in the chicken broth and the remainder of the soup base ingredients. Bring to a boil, then turn down heat to low and let simmer for about 8-10 minutes.

Prepare the noodles – While the soup is cooking, prepare the kalguksu noodles according to the package instructions and set aside.

Assemble the bowl – In a bowl, add in the noodles and pour the broth over. Top with scallions and chili crunch if using and enjoy your delicious chicken Kalguksu!

What is kalguksu made of? Where can I get them?

Kalguksu are noodles made out of wheat dough and eggs. They are rolled and cut with a knife, hence the term knife-cut noodles. You can get them at most Asian grocery stores in the refrigerated noodle section.

Can I freeze Kalguksu?

Yes you can definitely freeze kalguksu noodles as long as they haven't been mixed in the soup yet. Just put them in a freezer bag and pop them in the freezer.

What other proteins can I use for kalguksu?

Kalguksu is also delicious with seafood and beef. Some restaurants, such as the famous Hangari Kalguksu in Koreatown Los Angeles, have a menu full of variations that you can look to for inspiration. If your goal is to cook a relatively healthier and lower-calorie recipe, I would recommend sticking with chicken or seafood.

To store, keep the noodles and soup separate, or the noodles will get overly soggy. You can pre-make the chicken soup and store it in the fridge in an airtight container for 3-5 days. 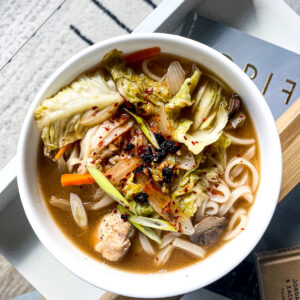 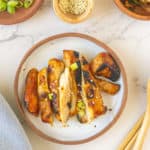 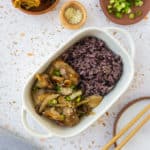 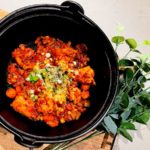